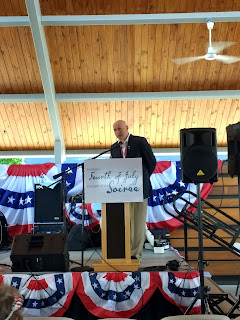 Prof. Williams was a very-early 2016 Donald Trump supporter. Williams founded and chairs "Law Professors for Trump" to fight for our 45th President, for America First policies, and for confirmation of Trump nominees.

Williams's group takes this fight to the media and to the federal courts. The independent association of law faculty is now advancing Trump's 2020 re-election.

Williams' early Senate campaign has already seen success. As he announced on July 4th, and as his website (vw4v.com), states its goal:

We seek to 'jumpstart' the GOP Senate nominee selection process to insure that Virginia Republicans have ample time to both raise funds for and unify around the strongest woman or man that emerges from the scrum."

Just four days after Williams' announcement, on July 8th, former congressman Scott Taylor did just that -- formally announcing his decision to run. Williams immediately praised Taylor for his "stellar service to our nation – both in the military and in Congress."

Williams welcomed Taylor to the race and expressed hope that other contenders would begin the race early, saying

"With Republicans unified and working together from the beginning, I know that Mark 'Russia-Hoaxer' Warner will be soundly defeated in November 2020."

At his own July 4th campaign launch, Williams stated that his early campaign launch was also the beginning of a historic effort to appeal to conservative-moderate Democrats, Libertarians, and Independents to reject Warner:

"Working together against Warner, Virginians of all (or no) partisan stripes, can send the DC swamp a populist message -- America First. Stand Proud with President Trump, or Stand Aside.

National Democrats Order Warner to "Jump," and He Responds "How Far Left?"

For years, Mark Warner has dutifully asked "how high?" anytime the national party ordered him to "jump." Now Warner asks: "how far left?"

And Virginians now respond: "16 years of Mark Warner is enough -- way too much!"

Williams is harshly critical of incumbent Warner for following national Democrats in their hard-left lurch to:

*Open the Southern Border to Mass Alien Inflows (an Invasion by any other name) and then give Illegal Aliens Free Health Care;

Warner has repeatedly embarrassed Virginia by his absurd anti-Trump slanders, and his partisan Russia-hoax investigations against President Trump, the Trump family and Administration associates.

Like so many elitists suffering from Trump Derangement Syndrome, Warner just cannot accept the truth. No Collusion. No Obstruction.

Instead, it was Mark Warner who was caught having extensive contacts with a Russian oligarch's lobbyist (March and April of 2017) to gin-up the hoax.

Williams's Senate campaign will explain how ongoing anti-Trump congressional investigations are unconstitutional. They "are just the latest shameful stage in the establishment crusade against disruptive Donald Trump and the 2016 American voters."

Posted by Shonda Ponder at 12:34 AM No comments: