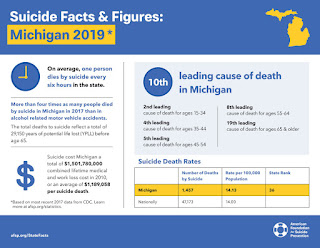 Lansing, MI - March 2, 2020 - (The Ponder News) -- According to the Centers for Disease Control and Prevention, suicide is the tenth leading cause of death in the United States and in Michigan. On Thursday, March 5, advocates from the Michigan Chapter of the American Foundation for Suicide Prevention (AFSP), the largest suicide prevention organization in the United States, will meet with lawmakers to urge their support of HB 5482, which would require the National Suicide Prevention Lifeline (1-800-273-8255) to be printed on all middle and high school student identification cards and encourage middle and high schools to clearly post suicide prevention and mental health informational materials within the school building and on their website. Advocates will also urge lawmakers to further strengthen existing school suicide prevention laws by requiring related training for teachers, education for students, and adoption of school policies and procedures.

"As a survivor of suicide loss, I advocate for policy change because thousands of people in our state are affected by this health crisis each year. I advocate so that we all may become smarter about mental health. It is imperative that we fight for legislation that is both preventative and in support of those who struggle. We have this hope for change because suicide is preventable with effective policies and legislation in place. Together with our elected officials, we will save lives and bring hope to those affected by suicide," said Lisa Matway, AFSP Michigan Chapter Board Member.

The AFSP Michigan Capitol Day is a special day for all who have a connection with or a personal story around the topic of suicide. Attendees will meet with their legislators to share their stories about why they participate in this advocacy effort, giving a human face to this important public health problem and helping lawmakers understand that investments in mental health and suicide prevention can save lives.

AFSP Michigan Chapter advocates are part of a larger national movement of AFSP volunteer advocates who will visit state capitols across the United States in 2020 to bring best practices in suicide prevention to legislators and their staff. To learn more about AFSP's advocacy efforts, visit here: https://afsp.org/our-work/advocacy/.

The American Foundation for Suicide Prevention is dedicated to saving lives and bringing hope to those affected by suicide. AFSP creates a culture that's smart about mental health through education and community programs, develops suicide prevention through research and advocacy, and provides support for those affected by suicide. Led by CEO Robert Gebbia and headquartered in New York, with a Public Policy Office in Washington, D.C. AFSP has local chapters in all 50 states and the District of Columbia with programs and events nationwide.

Posted by Shonda Ponder at 9:07 AM No comments: