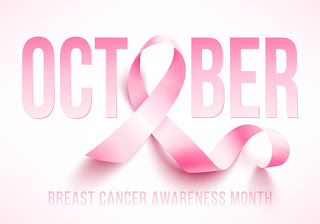 “We have all been touched in some way by breast cancer. This month is a time for us to remember the loved ones we’ve lost in the battle against the disease and to honor the brave women and men who have prevailed in their struggle.

“Breast cancer remains the second most commonly diagnosed cancer among American women, with one in every eight women developing breast cancer in her lifetime. As of January 2018, there are more than 3.1 million women with a history of breast cancer in the U.S. But despite the many strides we have made, more than 40,000 women will lose their battle with breast cancer this year.

“These statistics are sobering, but there is hope. Federal funding for breast cancer research has helped propel advances in detection and treatment. And the Affordable Care Act has provided life-saving access to preventive services, including screening, and treatment for millions of women who previously lacked health insurance coverage while ensuring that women who have had breast cancer could no longer be denied coverage for a pre-existing condition.

“We must fight against any threat to these protections to ensure women continue to have access to the care they need. Breast cancer awareness must be about more than sporting pink ribbons. It must be about making sure all women have access to the health coverage and care they need and ensuring resources are directed toward identifying and developing treatments that will save lives and finally cure this terrible disease.”

Washington, D.C. - October 12, 2018 - (The Ponder News) -- On October 5, 2018, President Trump signed H.R. 302, the Federal Aviation Reauthorization Act of 2018 & the Disaster Recovery Reform Act, into law. This legislation allows the Governor of a disaster-impacted state to request a waiver of the general prohibition on duplication of benefits in the Stafford Act that prohibits individuals from receiving Housing and Urban Development grant funding if they accepted a Small Business Administration loan.

The Disaster Recovery Reform Act includes a legislative fix that Congressman Culberson spearheaded in the House-passed version of the disaster relief bill. This provision allowed Governor Greg Abbott to request a waiver so that Harvey survivors who took out Small Business Administration loans to repair their homes will no longer be prohibited from using Housing and Urban Development grant funding to repay these loans later.

On October 5, 2018, Congressman John Culberson (R-TX, 7th) sent a letter to Governor Abbott urging him to immediately request the Duplication of Benefits waiver.

Congressman Culberson, Chairman of the Appropriations Subcommittee on Commerce, Justice, and Science (CJS), released the following statement after Governor Abbott submitted a request to waive the current ban on duplication of benefits that prevents those who accepted a Small Business Administration (SBA) loan from receiving Housing and Urban Development (HUD) grant funding later.

“I thank Governor Abbott for swiftly acting on my request to submit this waiver to help the many Harvey survivors that are still recovering from last year’s storm. We’ve worked closely together to bring relief dollars back to Texas, and today’s waiver request brings us one step closer to resolving the ban that unfairly prevents homeowners who accepted an SBA loan to rebuild their homes from receiving HUD grant funding later.

“I urge the President to grant this waiver as soon as possible so that homeowners have access to funds that allow them to rebuild.”