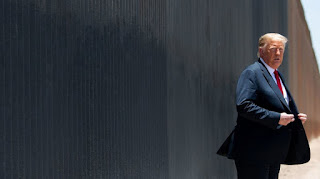 U.S. District Judge Gary Feinerman in Chicago, Ill., rejected a rule Monday implemented by the Trump administration that aimed to deny green cards to immigrants utilizing food stamps and other public benefits. The decision applies nationwide, not just in the state of Illinois.

Read the whole article at NPR by clicking HERE

Posted by Shonda Ponder at 9:19 AM No comments: 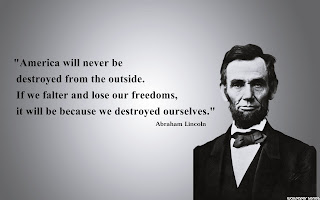 In Lincoln’s Lyceum Address of January 1838, titled “On the Perpetuation of Our Political Institutions,” he described mobs as the enemy of law-abiding citizens. He also captured the exasperation of citizens when government does nothing to suppress the mobs.

Lincoln, who was only 28 at the time, said this about mobs:

“Having ever regarded Government as their deadliest bane, they make a jubilee of the suspension of its operations; and pray for nothing so much, as its total annihilation.

“While, on the other hand, good men, men who love tranquility, who desire to abide by the laws, and enjoy their benefits, who would gladly spill their blood in the defense of their country; seeing their property destroyed; their families insulted, and their lives endangered; their persons injured; and seeing nothing in prospect that forebodes a change for the better; become tired of, and disgusted with, a Government that offers them no protection; and are not much averse to a change in which they imagine they have nothing to lose.

“Thus, then, by the operation of this mobocratic spirit, which all must admit, is now abroad in the land, the strongest bulwark of any Government, and particularly of those constituted like ours, may effectually be broken down and destroyed, I mean the attachment of the People.

“Whenever this effect shall be produced among us; whenever the vicious portion of population shall be permitted to gather in bands of hundreds and thousands, and bum churches, ravage and rob provision stores, throw printing presses into rivers, shoot editors, and hang and burn obnoxious persons at pleasure, and with impunity; depend on it, this Government cannot last.”

Read the full article at FOX News by clicking HERE

Posted by Shonda Ponder at 9:11 AM No comments: