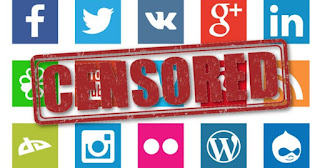 Source: News Punch
August 22, 2019
According to Bloomberg News, an Executive Order has been drafted that will instruct law enforcement and federal antitrust agencies to open probes into the “platform bias” of Google, Facebook and Twitter in regards to the censorship and suppression of conservative voices on social media.

The executive order is in its preliminary stages and hasn’t yet been run past other government agencies, said a White House official.

Bloomberg News, which has seen a copy of the draft executive order, reports: The document instructs U.S. antitrust authorities to “thoroughly investigate whether any online platform has acted in violation of the antitrust laws.” It instructs other government agencies to recommend within a month after it’s signed, actions that could potentially “protect competition among online platforms and address online platform bias.”

Posted by Shonda Ponder at 1:58 AM No comments: